Logo of the SFBT

The SimForum BAT Team, short SFBT, was founded by a couple of members in February 2005. Back then, SimsZone was the "home" of the team and this was where its creations were to be found for download. In January 2007, the SFBT made a move to a seperate new page, called SimCityPlaza, giving the German SimCity community a real home (SimsZone used to be a mixed The Sims and SimCity page). Parts of the old SimsZone contents were preserved, new tutorials and articles were added. Furthermore, a new download center was established; the SimCityKurier was born where all SFBT creations can be downloaded. All the SFBT members are more or less active at SimForum.de, the biggest German community for The Sims and SimCity fans.

The best-known SFBT creations are probably the PreFabs (also Plattenbauten) by Ch. P., as well as the Hamburg W2W buildings and residental estates by stephenhh. 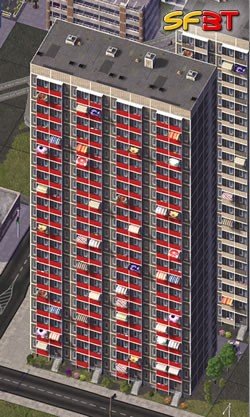 First blueprints for the Plattenbau buildings in the former GDR can be traced back to the Bauhaus style. In the 70's and 80's, an immense demand for residential buildings had to be satisfied somehow. Highrises were the answer to accommodate as many people as possible on a given lot size. Often poor families lived in these highrises, the lot have been implemented as R-§. With this technique a lot of flats were constructed in a faster way than before. Also a lot of people could live in such a highrise. Normally they stand in one district, and often had a swimming hall, restaurants, parks, childhoods and garages. Each flat looks exactly the same, only the interior was different. An example for this type of building is the Plattenbau Unité d'habitation in Berlin, constructed by Le Corbusier. It was an example for most of the Plattenbau buildings in the world, built in 1947. A short form of Plattenbau in German is "Platte", the walls were sticked on the wall before, like LEGO.

The SFBT Euro Road Texture Mod by frimi and Andreas is very popular, too, as it changes the American styled road with yellow double-lines into an European styled one with single white dashed line. Other well-known creations are the differently styled park sets by Andreas, ArkenbergeJoe and Khiyana. ArkenbergeJoe also created the NAM heavy rail viaducts in three different colours. Further rail stuff has been made by Kenworth, like his catenaries or stations of which some are to fit the NAM bridges.

Other projects include new (NAM) additions like Tram-in-Road pieces by Chrisim and Schleicher68, German rail signals and freight cars by royal, typical Central European farmhouses by voltaic, and new German locomotives by Kenworth.


The Certified Team that this article is about can be found here on SC4D and here on SimForum.