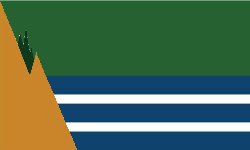 Three Rivers Region, also known as 3RR began as a City journal at Simtropolis (ST) on March 12, 2006. Through a combination of casual style, lots of in-game tutorials and tips, and the introduction of the infamous [linkie], the CJ quickly gained a large and dedicated following of readers. David (dedgren) spent several months developing 3RR as a four quad (large city tile) "sandbox" region, and he made no bones about taking advantage of "game adjustment parameters" (i.e.: the cheat codes) to develop things however he felt like.

By the summer of 2006, it was clear that a main focus of 3RR was going to be on terraforming and the natural environment. dedgren quadrupled the region in size in ____ of that year, and the landforms of 3RR took the basic shape that they remain in today. The CJ also settled in to its ongoing practice of incorporating a great deal of RL pics and content, ranging from the bathrooms 500 feet underground in Carlsbad Caverns to scenes of dedgren's everyday life and travels in Wikipedia:Alaska, where he resides. The summer of 2006 also saw the first custom content by dedgren show up in 3RR: ploppable water rapids and waterfalls, which have proved to be a continued hit on the STEX to this day. Nowadays, most of the 3RR Custom Content can be found on the 3RR Exchange.

In the fall of 2006 dedgren became at the same time increasing frustrated by questions of the game's relationship to RL scale and fascinated by extending game output into the form of maps. In October of that year, he expanded 3RR once again, this time to a gigantic region of 16 by 16 quads (1,600 square miles/just over 4,000 square kilometers). He documented in the CJ his work with wouanagaine's SC4Terraformer in creating the expanded region, and then took readers through the immense task of individually terraforming 3RR's 256 quads. This work was completed in early December, 2006.

Shortly afterwards, dedgren, who had become increasingly frustrated with the problems ST was then experiencing with slow load times, crashes and many times simply being off-line, decided to move future new work on Three Rivers Region to SC4D. The decision to do this was a very difficult one for dedgren to make, as 3RR was at the time one of the most commented on and viewed CJs at ST. The first 3RR post at SC4D was on December 20, 2006, and dedgren continued to make "keep folks informed" posts on 3RR-ST as well. 3RR-ST was, in fact, only recently discontinued (October 18, 2008) and, as of that date, it had gained 2,165 posts (5th on the all-time ST CJ list as of that date) and 66,213 page views (6th on the list).

At SC4D, 3RR quickly grew from being an immensely popular MD (an "MD on steroids," as it has oftentimes been referred), to a much larger and broader project, leading it to be moved to the Projects section of SC4D. It was there that the many facets of 3RR have blossomed, including the 3RR Atlas--a comprehensive list of all the townships within 3RR, the 3RR Quick Finder--a list of links to some of the more interesting or informative sections of the 3RR thread, as well as the Table of Contents, the 3RR-ST section (currently a work-in-progress), and the 3RR Honors List, which is a on-going list of all the members of 3RR's "00" Club--those who have registered the post count in multiples of 100 (100, 200...3000, 3100, etc.).

3RR has also expanded not only to the task of building and maintaining the region, but also into a development thread for different custom content projects, both by dedgren himself, and other members of the 3RR and RAM Teams, most notably Matt (threestooges), who has contributed to several projects. Among the custom content that has been featured at 3RR is the Fractional Angle Roads and Railroads (FAR/FARR), a set of puzzle pieces designed to "break the grid" of SC4 by placing roads and rails at angles other than 90 and 45 degrees. The Single Track Rail (STR) project is also showcased at 3RR, and developed single track rails for the rail networks, as well as single-to-double transitions and switches to make the in-game network and the STR network compatible. In addition to transportation network additions, 3RR has also contributed other custom content such as central-pivot and large farms, ploppable telephone/electricity poles and windmills, and rapids for ploppable water.

David has created many tutorials.

The Showcase that this article is about can be found here on SC4D and here on ST.