Patricius Maximus is a Simcity player and fan, as well as a member of the Simcity community. He has authored a total of 4 City Journals, one of which is inactive. His CJ's are detailed below.

Patricius is also an interchange builder and overall transit planner. He is also known for his aversion and avoidance of weaving on freeways.

Patrician City was Patricius Maximus's first attempt at a CJ. It can be divided into three phases; The Original Region, Diversification, and the Storyline phase.

First, Patricius showed the parent region, Patrician City. As shown at right, the region was one of PM's earliest, and displayed a characteristic newcomer appearance. The region had a population of around 300,000. There were still problems with it, chief among them mild weaving issues. It did have areas of beauty, the foremost of them being the Delta Islands suburb.

Patricius then moved on to a region called Extraea. Extraea was a step up from Patrician City. It was also Patricius's first use of the Cycledogg Tree Mod.

The Patrician storyline phase was the story of the establishment of a Patrician colony, then the homeworld being destroyed. The remainder of the CJ focused on a migration to planet Darida, and their war with the natives of the planet. The Patricians prevailed in the end.

to be added soon 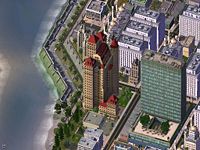 Franklin County was created by Patricius Maximus on 2 June 2008, only 3 days after the Simtropolis Site Hack. It showcases the development of a region called Franklin County from it's creation 4 billion years ago to the present day. There are story arcs within the general plot, which are showcased below. The CJ is in union with 9 others in the Alliance of Fuel Developing and Exporting States.

It is ser on an earth-like planet which Patricius will not provide specifics on, a region called Franklin County was the home of two freeways, I-30 and I-85, which intersected via a cloverleaf. The first settlers came to what is now Franklin proper and the region snowballed. A peninsula between the Franklin River and Franklin Creek developed into the downtown of the county.

Franklin had a period of expansion known as the "Housing Boom". It came in 2 stages. The second is still ongoing, but waning. In the wake of the first stage, Franklin became a metropolitan area.

Patricius maintains a newspaper for Franklin, called the Franklin Chronicles, which is updated irregularly.

The most significant story arc in Franklin County is Agonus. A meteor landed in East Valley, and a team found it. When they took it to their lab, it exploded in spontaneous fusion. The meteor was tracedback to an unknown planet, which was named Agonus. A space probe was sent, and it found a eerie, radioactive, barren world. An orbiter/lander probe is now en route.

to be added soon

Patricius is an interchange builder and overall transit planner, widely regarded as on par with Haljackey. Patricius has aversion to weaving on freeways. He has also developed a reputation with some for hitting congestion before it appears rather than after.

He has also recieved inspiration from others. Haljackey, who first displayed an RHW cloverstack, inspired Patricius to create his own. He has since modified his cloverstacks to be more compact.