Difference between revisions of "RealHighway"

The RealHighway Mod (formerly Rural Highway Mod), or as it is perhaps better known, the RHW, is a modification produced by the NAM Team, currently headed up by Tarkus. The RHW is optional component to the Network Addon Mod, released separately, and hence requires the NAM as a dependency. It enables a completely new network that Maxis left unfinished (known internally as DirtRoad), formerly part of the NAM ANT Plugin. Through Override Technology, wider variations of this network, often allowing increased capacity, can be created through draggable means, along with Modular Interchange System (MIS) ramp segments.

In spite of its name, it has expanded from merely being a network for strictly rural usage to a largely modular, all-purpose highway. As a result, there have been calls to change the name of the project for years now, but the name has essentially "stuck" in spite of those, with various team members over time advising the public to "imagine the 'R' stands for something else".

The RHW project was started as the Rural Highway Mod by qurlix and nooneatall in August 2005, with an initial "public alpha" release, Version 1.2, coming in November that same year. qurlix had also planned a couple of other releases at various points, Version 1.5 and Version 1.7, but neither was ever finished.

Tarkus became involved in the project in October 2006, and took over the project in March 2007 after qurlix's departure from the community, releasing a small update, Version 1.3 in April, largely to address compatibility issues between the December 2006 NAM release and RHW Version 1.2, something which the unreleased Version 1.7 was originally intended to fix. With the release of Version 1.3b in June 2007, the RHW became an official NAM Team project.

For the Version 2.0 release, the RULs for the mod were completely re-written to change the RHW from a "side-by-side" override to a Starter Piece setup, coinciding with the incorporation of the Modular Interchange System, which allowed for true RHW interchanges for the first time. During Version 2.0 development, Tarkus expanded the project development team to include texture artists rickmastfan67 and Shadow Assassin (who had provided some graphical work for Version 1.3a and 1.3b), and Big Dig modeler blahdy, but all three of them left during 2008. However, Shadow Assassin returned in July 2009.

A new version, Version 3.0, was released on January 14th, 2009. The new release features the long-awaited RHWs, up to the RHW-10 (five lanes per direction), Elevated RHW-4 and MIS Ramps with models by Swamper77, smoncrie's RHW-2 and RHW-4 bridges, and over 60 puzzle pieces and numerous draggable additions, including the sought-after MIS-to-OWR transition. It also featured a radically re-designed texture set from Tarkus and ardecila. Version 3.2 fixed some path files in Version 3.0, coupled with some RUL Fixes included in the March 2009 NAM.

The next version, Version 4.0, has been under development since January 2009. Several new developers have joined Tarkus and Shadow Assassin in 2009, including Blue Lightning, choco, jmvl and deathtopumpkins. mrtnrln, toja and mtg came aboard in 2010. The default texture set is being revamped again by Tarkus for Version 4.0, and will blend the "traditional" RHW look with the scaling improvements introduced in the Version 3.0 texture set.

Plans after Version 4.0 involve going to a smaller-scale release format, tentatively dubbed the "4.x Series", with the version number rolling over to 5.0 once certain developmental criteria have been met. 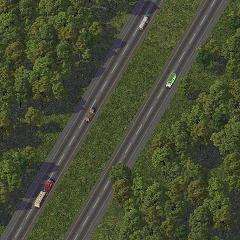 The RealHighway network as it appeared in version 1.2.

The RHW network is a Highway-type Network, which means it does not allow access to RCI Zones. Due to the "unfinished" state Maxis left it in, it does not have Tunnel capability (One-Way Roads, Avenues or Maxis Highways must be used for workarounds), nor can it show up on the Regional Transportation View. Both of these functionality gaps are the result of hardcoding, and thus, cannot be fixed. RHWs can also be bulldozed using the Dezone tool, much like Streets. It is also a 1-tile network, the only such Highway-type network, which makes it particularly conducive to producing Override Networks.

The FLUPs (Flexible Underpass) system will be expanded to include RHW components as part of Version 4.0 by Chrisim and toja.

In the current Version 3.2 release, bridges are possible for the RHW-2 and RHW-4 networks, and Wider RHW and MIS bridges are currently under development by choco.

The base network the RHW Network Tool produces is known as the RHW-2 (RHW, 2-lane). It is a 1-tile, 2-lane, 2-way network, much like the Road network, but with a higher capacity and speed. The increase in capacity and speed is dependent on the Traffic Plugin one has installed, but it is generally about twice that of a road. (The "A", "B" or "Z" simulators are recommended for RHW users.) 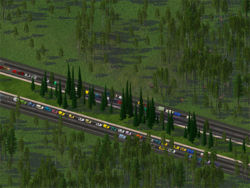 The Euro-RHW mod as it first appeared in version 1.3b.

The RHW-4 is an Override Network of the base RHW-2 network, utilizing a Puzzle-Drag Override to transform the RHW-2, into a 1-tile, 2-lane, 1-way network. It is known as the RHW-4 because the full width of both directions is 4 lanes over 2 tiles, but because it is based on a 1-tile network, the two halves of a full RHW-4 do not need to be adjacent, and can be split, to allow Variable Width Medians, unlike Maxis Highways (without the cumbersome Multi-Highway technique). It has twice the capacity of an RHW-2.

Also unlike the Maxis Highways, the RHW-4 can have at-grade intersections with other networks, in addition to allowing for grade-separated interchanges using the Modular Interchange System (MIS) interface ramps. In Version 2.0, orthogonal at-grade intersections with Road, Street, Rail, and RHW-2 are available, and GLR at-grade crossings are made possible by a puzzle piece. Drawing a street on the inside of an RHW-4 causes it to turn into an Emergency Turnaround Lane.

The RHW-6S is just like the RHW-4, except that it takes up an additional two tiles in width, and has an extra lane per direction, fitting 6 lanes on 4 tiles. The capacity of the RHW-6S, due to how the paths are situated, is exactly the same as the RHW-4, and its primary purpose is as "functional eyecandy" to allow for realistic acceleration/deceleration lanes at interchanges. In this regard, it is not a "true" wider network. Its only interaction with other networks is through grade-separated interchanges (with the MIS), and with Overpasses.

Diagonal functionality, in the form of puzzle pieces, was added to the RHW-6S in Version 3.0. Draggable functionality is planned for later inclusion.

Unlike the RHW-4 and RHW-6S, it will not be possible to separate to allow for Variable Width Medians with the RHW-6C.

Like the RHW-6S, the RHW-8 can go diagonal with puzzle pieces.

At one point, there was also an RHW-8C planned, which would have been situated on 3 tiles, like the RHW-6C. A prototype of this network was shown in August 2007 in the RHW thread at SC4D.

The RHW-8C concept was revived by Blue Lightning in 2009 and will be incorporated into a future release. 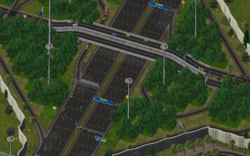 Interchange along a RHW-10, the largest RHW network.

The RHW-10 is the widest RHW network, consisting of 10 lanes over 4 tiles. It has the same capacity as an RHW-8, and thus, is more or less functional eyecandy.

It is orthogonal-only in Version 3.0.

The Modular Interchange System (MIS) Ramps are the backbone of the RHW's interchange capabilities, allowing for draggable custom setups. The MIS is a 1-tile, 1-lane, 1-way network, allowing for connections to surface streets.

Blue Lightning has shown a prototype of an EMIS-1 (15M) Wide Radius Curve capable of over passing other RHW networks called FLEXFly. It is planned for release in RHW Version 4.0.

These networks have been proposed, and some have even had prototypes made, but they are planned for a future release.

The RHW-3 is an Override network, built on the same principles as the RHW-6, but allowing two-way traffic, much like a 2+1 Road in Europe, or climbing lanes on mountainous highways. It is the RHW equivalent of the ARD-3 from the NWM project.

As of this writing, there are no current plans to take the RHW network wider than the RHW-10. Any network, if it were to be created, would probably have to be limited to orthogonal-only usage, due to the size of the network (at least 5 tiles), and the complexity of diagonal RULs.

Elevated RHW-4 and MIS were added in Version 3.0, and Elevated versions of the other networks are planned for a future release. Additional heights for the Elevated RHW networks have been proposed to allow additional functionality, and a prototype for a Double-Decker RHW-4 has also been shown in the public development threads.

The Version 4.0 release will include two new pieces to allow for the construction of ground-level Single-Point Urban Interchanges (SPUIs) and the Diverging Diamond Interchanges (DDIs). 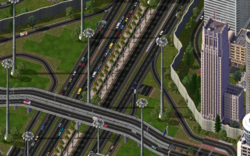 A look at Version 2.0 with the Modular Interchange System (MIS) in a Multi-RHW configuration.

Wider RHWs can also be made using the Multi-RHW technique first developed by Haljackey, which essentially involves putting two one-way RHWs (usually RHW-4 or RHW-6S) in the same direction, side by side. Although this creates 8 lanes (or possibly more) in each direction, the networks are still separate RHW-4s, and must be linked together to work properly. A Multi-RHW is a great way to make a collector/express system in SC4 that many real life highways use.

Prior the Version 2.0 release, the Multi-RHW was possible, but very difficult to make due to the fact that the RHW-4 was built using a Side-by-Side Override. This would often result in some parts of the Multi-RHW going in opposite directions and was a pain to correct. With the switch to the starter piece system included with Version 2.0, Multi-RHWs can now be dragged without any worry of changing direction, making them much easier to construct.

For more information about the Multi-RHW, see Multi highway. 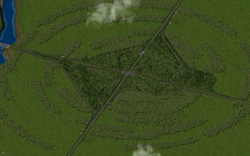 Shadow Assassin has released a popular Euro Texture Set for RHW Version 2.0, but it is not fully-compatible with the new Version 3.0 release, though it has been confirmed that he is working on an update. mrtnrln has released a series of prop additions as part of his RHW Addon Mod, and is also working on an RHW Euro texture set based on Tarkus' default North American set from Version 3.0. Xyloxadoria has also released a number of popular T21 mods for the RHW on the STEX, which add lights and barriers to some of the networks. Blue Lightning has also made a number of addons as well, including the popular Elevated RHW-4 Cosmetic Mod.